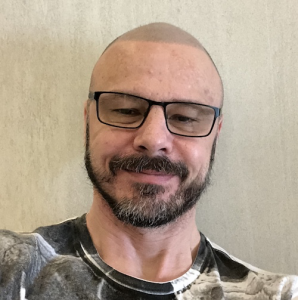 Terry J Quinn is a self employed Massage and Male Grooming therapist, working from his home based salon based in a lovely Yorkshire village known as Baildon. He also has two online retail businesses, one in the Home Fragrance sector, and the other in the Pet Food Sector.

Baildon lies to the north east of Bradford, and is linked to Bradford and Shipley by the B6151. To the north of Baildon lies Baildon Moor, a part of Rombalds Moor, with several quarries and underlying strata of coal. Baildon is situated on a hill to the north of the River Aire and the Leeds and Liverpool Canal.

Terry lives with his life partner who is also his soulmate, two wonderful Irish Wolfhound dogs (Sid and Vanda), a Cat named Sammy and Bearded Dragon named Boris!  He has two grown up children and left his Senior Manager role within the National Health Service (NHS) a decade ago in order to spend more time with his loved ones and run his own business.

Upon leaving school, Terry trained as and then worked as a Chef for a number of years and has retained his love of food and creating a whole host of gastronomic delights ( He also, sadly creates the occasional gastronomic disaster! ).

From a young age, Terry was diagnosed with insulin dependant diabetes. Back in those days, there was a stigma attached to diabetes, and remembers his younger brother refusing to drink from the same cup, eat with the same knife and fork, or even dry his hands with the same towel, in fear of catching it!

Growing up with diabetes was at times difficult, going through periods of non compliance every now and again, but generally accepted it and simply got on with life. In 1987, he joined the National Health Service as an appointments clerk, and also got married and started a family.

On a family vacation one year, for no apparent reason, whilst playing on the beach with his wife and two small children, he suffered a bleed in his right eye.  It was a shock and went to visit a local health practitioner, who looked at the eye and referred him straight to a hospital  ophthalmologist.

Tests were carried out, and the doctor asked of he was worried about his eye, to which he replied – yes, of course, and the doctor replied p you should be, this could be very serious. Over the next several years, he continued to have bleeds in his eye, and would eventually have laser treatment to cortkorise the leaking vessels.

For long periods of time, there would be no further issue, but every so often, a small bleed would occur again, and more laser was required. Eventually, the laser became a regular thing, and due to the sheer amount of laser, his peripheral vision deteriorated.  The consultant explained that if the laser treatment wasn’t done, then he would have lost his sight for sure – so, the peripheral deterioration, whilst being a nuisance, was of course much better than loosing his sight altogether.

Despite the peripheral vision problems, he remained within the legal limits that would permit him to continue to drive. DVLA agreed to him retaining his license for a period of three years and when the three years was up, he would have to have visual fields tests, the results of which would determine if he was allowed a further three years or not.

Having an insulin pump certainly helped Terry to maintain good blood glucose control, which in turn helped with maintaining his vision to a decent standard. So much so, that he didn’t feel at all disadvantaged in terms of his vision, as it didn’t stop him from doing anything at all.

On 11th June 2018, Terry was registered as Sight Impaired ( Partially Sighted ). He is intent on finding creative new ways to continue engaging with The World as a man with visual impairment. In writing this blog and sharing his journey he hopes to help others who find themselves in the same or similar often scary situation,  also to hopefully learn from others who are already at this point and beyond, should they happen to come across my blog.

For more information on Terry’s vision, you may like to see the following posts:

Looking Through My Eyes

If you have found my blog interesting or useful at all, and think any of your friends would also find it of use, please let them know.

I would love to hear your stories and views

Thank you for subscribing.

we respect your privacy and take protecting it seriously